Rust is Machine Oriented High Order language, or mohol best regarded as an extremely fast, robust, performant, scalable, and powerful System Programming Language i.e. it gives you low-level access to system resources, used more for writing Systems software, such as Drivers, and compiler tools, low-level networking code, databases and so one to make the code of software more efficient. C, C++, Swift, and golang are some the similar languages.
Rather than the user-facing software programs like Web application programming, gaming Software that can be done with languages like Java, JavaScript, Python, C#,

Rust is a great package manager and an ecosystem of crates, without a runtime.

A brief discussion over memory management.

Programs we can Build with Rust.

One can also create Blockchain smart contracts(ex. Solana blockchain), Games, some GUI applications although the ecosystem is not fairly mature.

So we are done with understanding the bond of Wasm and Rust.

In this blog, I'll be posting about setting up Enarx as a backend and the procedure of implementing Enarx keeps over the Rust project.

Before we start let me mention that the Enarx uses this epic combination to make Confidential Computation Language and Architecture independent, it is hardware-specific framework threby OS dependent, i.e Linux is recommended if you are a Windows user or macOS.

It requires a CPU with a supported Trusted Execution Environment. and currently it supports **Intel SGX and AMD SEV-SNP"

I'm in Intel SGX support device so my focus will the same.

1. Setting Up for SGX machine

Since everyone cannot access hardware with the support for Intel SGX or AMD SEV-SNP, so Enarx facilitates you with KVM support that can be run on devices other than this which have virtualization support.

KVM is loaded automatically by Linux Kernel.
you can check its presence by running the following command.

expected output should be

for amd intel would get replaced with it.

Now with this, you are done with Hardware requirements and certain permissions. Now it's time to set up your project, before that,

you can also install with alternative methods like crates.io and Nix.

Setting Up a New Rust program.

Assuming you did install the enarx binary and have it in your $PATH, you can now run the WebAssembly program in an Enarx keep.

Look at the generated Cargo.toml file: and update the dependencies section.

Similar to the above compilation:
Compile the guessing_game into .wasm.

To see what backends are supported on your system, run: 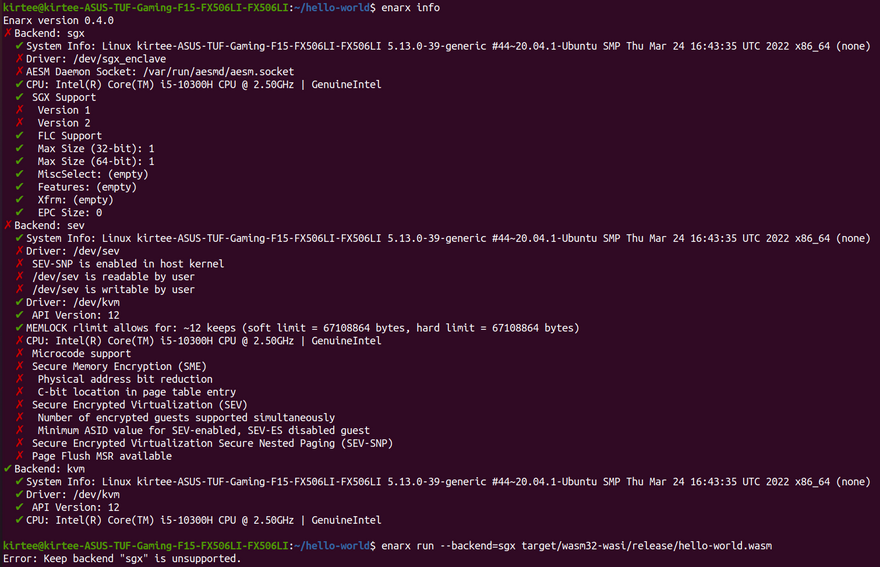 Here you can see that my device Backend: kvm is supported and on manual selection backend "sgx" is unsupported.
So am working with backend=kvm target

You got the same output and this is all made possible by setting WebAssembly as compile target. you can read more on it in my blog ENARX with WASM: Language and Architecture Independent.

JavaScript and WASI - Simplifying the process even further

Once unpublished, this post will become invisible to the public and only accessible to Kirtee Prajapati.

Thanks for keeping Wasm Builders 🧱 safe. Here is what you can do to flag kirteeprajapati:

Unflagging kirteeprajapati will restore default visibility to their posts.