Wasm Builders is a community of 1,175 amazing builders

In this tutorial, I'll go over Shopify's deployment of WebAssembly.

To keep the code base and user experience simple, Shopify has a product principle: Build what merchants need, most of the time. If merchants need features beyond that core set, Shopify provides an app store with third party apps to solve for that long tail of requirements.

The primary mechanism of this ecosystem is an “App”, an independently hosted web service which communicates with Shopify over the network. This model is powerful, but comes with a host of technical issues. Partners are stretched beyond their available resources as they have to build a Web service that can operate at Shopify’s scale.

Many of those apps are hosted on their own infrastructure, and during flash sale events, are sometime taken down by the surge in load.

Even if Partners’ resources were unlimited, the network latency incurred when communicating with Shopify precludes the use of Apps for time sensitive use cases, so that partners can focus on using their domain knowledge to solve problems, and not on managing scalable Web services. Thus, to help app developers in building more stable apps, Shopify wants to allow app code to run internally right within Shopify.

But, executing untrusted code can cause harm to Shopify’s platform at large.  So, there is a need to prevent security flaws and mitigate their impacts when they occur.

In e-commerce, speed is an another aspect that merchants need to drive sales. If a feature we deliver to merchants doesn't come within the time stipulations, then we may as well not deliver it at all. Thus, there is a need of a format that is performant, secure, and flexible.

But how can you alleviate all these concerns? By using WebAssembly...

Shopify executes Wasm outside of the browser and with no Javascript involved. Wasm satisfies their three main technical requirements: security, performance, and flexibility.

How is it executing? 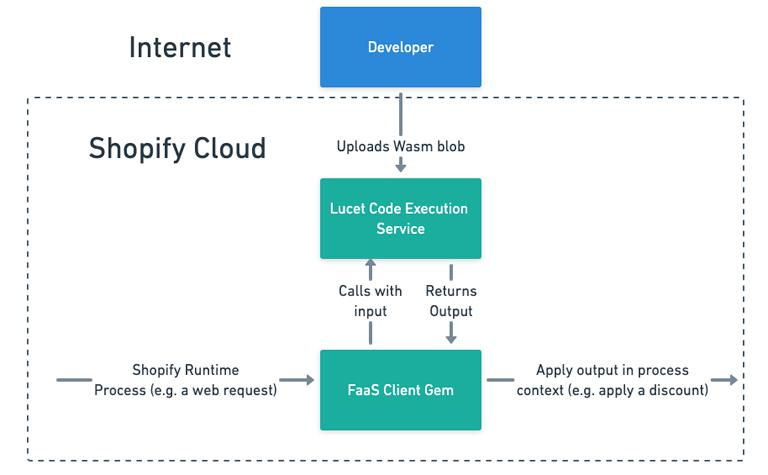 Here’s some metrics pulled from a recent performance test. During this test, 100k modules were executed per minute for approximately 5 min.

This chart demonstrates a breakdown of the time taken to execute a module, including I/O with the container and the execution of the module. The y-axis is execution time in ms, the x-axis is the time over which the test was running.
From the graph, time taken by module execution process takes under 5 ms, thus the performance impact of Lucet execution is negligible.

Rethinking Microservices with WebAssembly and Spin